It's the end of the 2010s as we know it, and Awfully Good Movies is feeling less than fine after revisiting the top 10 films selected by the readers of JoBlo.com as the Worst Movies of 2019! And although the PET SEMATARY remake isn't on this list, there's a line from that movie which applies to many of the flicks in the top 10: "Sometimes dead is better." Instead of letting the TERMINATOR franchise stay terminated after the failure of SEGA GENESYS, they would bring back James Cameron to produce the re-rebooted DARK FATE, only for Linda Hamilton's less-than-triumphant return to melt away into a vat of molten steel. Instead of Disney leaving THE LION KING alone in its rush to remake its animated classics, they would hire Jon Favreau to give the circle of life a CGI makeover, and although it broke box office records, many viewers did not feel any love tonight towards that soulless and pointless remake. Instead of having the creature-hunting adventures of the MEN IN BLACK and HELLBOY stop at their respective third and second installments, we instead had Thor and Valkyrie brandishing Neuralyzers in MIB INTERNATIONAL and future Red Guardian David Harbour donning the demonic makeup for an R-rated HELLBOY reboot, and after both of those movies went through numerous levels of production hell, their underwhelming reception would end up shutting down both the Men in Black and the Bureau for Paranormal Research and Defense for the immediate future. Instead of Tyler Perry retiring his Madea character with a thoughtful and profound final movie that made us sad to see her go, he somehow made A MADEA FAMILY FUNERAL a less fitting and funny finale than ERNEST IN THE ARMY. And instead of 20th Century Fox leaving the X-MEN franchise alone before its inevitable reboot into the MCU, they would end up making one last attempt at adapting the DARK PHOENIX saga that would make THE LAST STAND look like LOGAN in comparison. Oh, and Sony Pictures also thought we needed another reboot of CHARLIE'S ANGELS, only for all the women who independent to throw none of their hands up at it. Sorry, Elizabeth Banks, you're still awesome though.

But before Martin Scorsese dismisses all the films on this list as "not cinema", he should be happy to know that there were a couple of original movies that made it through here. Will Smith teamed up with legendary director Ang Lee to fight a younger version of himself--only for the audience to end up losing--in GEMINI MAN. Hilary Duff stretched her acting chops by starring in a retelling of the tragic murder of Sharon Tate that somehow ended up being more ridiculous than Quentin Tarantino having the Manson Family get incinerated with a flamethrower by Leonardo DiCaprio. Matthew McConaughey and Anne Hathaway reteamed in a mind-bending sci-fi thriller whose explosive twist ending was less Christopher Nolan and more "M. Night Shyamalan meets the series finale of ST. ELSEWHERE". And although it didn't technically make our list, the year closed out in epically disastrous fashion with Oscar-winning director Tom Hooper finally adapting Andrew Lloyd Webber's beloved musical CATS to the big screen thanks to some groundbreaking CGI effects...oh, I'm sorry, did I say "groundbreaking"? I meant "horrifying"...truly and utterly horrifying...I mean...the sight of Rebel Wilson eating those dancing cockroach people...can't wash it from my eyes...what was I saying? Oh yes...so Martin Scorsese should be happy to know that even the world of terrible movies still has some original ideas left to visualize onto the big screen, even if absolutely nobody was asking to see those ideas in the first place. Furry Jennifer Hudson was right...a new day has truly begun. Here's to a new decade of Awfully Good-ness, everyone!

SUBSCRIBE for more of all the LATEST JoBlo Videos here: https://goo.gl/R9U81J


Check out all of the JOBLO YOUTUBE channels below: 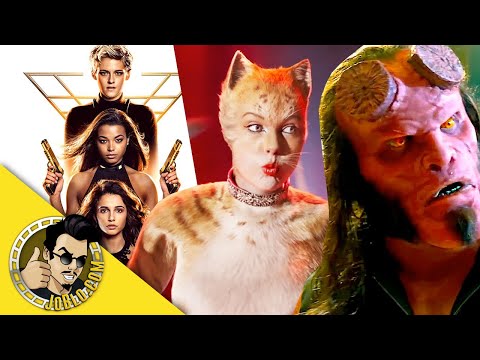 It's the end of the 2010s as we know it, and Awfully Good Movies is feeling less than fine after revisiting the top 10 films selected by the readers o...