50M Videos is the #1 place for all your heart warming stories about amazing people that will inspire you everyday. Make sure to subscribe and never miss a single video!

Like and subscribe right now, or this spider will crawl on your face when you’re sleeping.
Every day we see amazing people with unbelievable talents, whether that be official Guinness World
Record Holders or sportsmen at the top of their game. Want to see some of the best skills from around
the world? We have compiled an awesome list for you, just keep watching! You will not believe the
bravery needed for our top three skills.
This amazing yet somewhat freaky dancer just misses out on the top three in our countdown
today – but boy, he is still impressive. Performing at a mall in China, Cui Xinxing is known for
his ability to isolate his neck muscles so it looks like his head isn’t properly connected to his
body. You can see from the footage that this gets a lot of attention from passersby, who stop
and watch his performance. When he is at the end of his routine, he performs his final trick,
which looks like his neck has broken! One young girl gets such a fright that she jumps into the
air and runs away. But Cui Xinxing is not the only one in his family with this special skill. He
often posts videos of his mum joining him in the act! How would you react if you saw this in
real life? Let us know down below in the comment box.
If you have a fear of heights then look away now as our skill at number 8 is not one for the faint
hearted. The company Sky Dive Dubai sponsored World Champion Soul Flyers Fred Fugen
and Vince Reffet to break a new world record. Their challenge? To base jump from above
the pinnacle of the tallest building in the world – the Burj Khalifa. Standing at an incredible 829
meters tall, this building gives beautiful birds eye views over the Dubai landscape but the view
is not what these two men were looking for. Dressed in yellow jumpsuits, the base jumpers
made red smoke stream from their backs so that it is easier to see them as they fall. The
footage of their jump is breathtaking – how brave and talented must these jumpers be to do
this!? And preparing for the challenge wasn’t easy either- with the men having to spend time
up Swiss Mountains to acclimatize – how brilliant!


Aaron Fotheringham who was born with a condition known as Spina Bifida. Now in a
wheelchair due to his condition, Aaron has been clear that this will not let it stop him being
active and smashing world records. In 2018 at Woodward West Summer Camp, Aaron set not
one, not two, but three world records. Firstly, he achieved the longest wheelchair ramp jump
measuring it at around 70 feet. Next it was the tallest quarter pipe drop-in on a wheelchair,
falling from a height of over 27 feet, and finally from this same quarter pipe, he achieved the
highest wheelchair handplant. Aaron is such a great role model for disabled kids around the
world – showing them that disability should not be a barrier to them achieving their dreams.

jump
Austrian skydiver Felix Baumgartner was involved in the highest altitude jump in a project that
was sponsored by Red Bull. He also broke the record for becoming the first human to break
the sound barrier without using any kind of engine. He was flown 24 miles into the Earth’s
Stratosphere with the help of a helium balloon before starting his freefall, then parachuting to
Earth. The jump itself lasted about 10 minutes, which really does show how high up he was as
people fall very quickly. During his impressive stunt, Baumgartner reached top speeds of 1357
kilometers per hour – how he didn’t get travel sick, we do not know!
SOURCE:
https://www.youtube.com/watch?v=mJxsj51d-Pk

Walking on a tightrope takes a lot of skill right? Well how about riding a bike on one?! Our guy
at number 5 in our countdown takes this even further by doing it on the side of a mountain!
Trial bike world champion Kenny Belaey fell off the rope on his first attempt, but luckily there
were safety wires involved. He got straight back up there however, and successfully managed
to cycle along the line which was at an altitude of 2700m and 112 meters above the ground.
There really are easier ways to see the view!


Just making it in to our top three is a sport that up until now, we never knew existed. Jet Sprint
Boat Racing originated in New Zealand in the 1980s. This footage has been filmed more
recently however and shows pilot Dan Morrison and his co-pilot Karen McGuire racing around
this man made course in front of hundreds of spectators. The race is taking place in St. John in
Washington and you can see from the footage that the pair are traveling at top speeds. 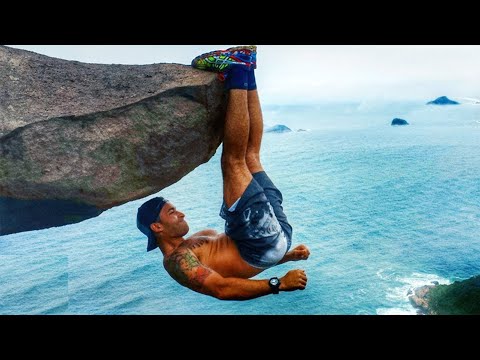 PEOPLE ARE AWESOME! AMAZING SKILLS50M Videos is the #1 place for all your heart warming stories about amazing people that will inspire you everyday. M...