In this episode of Let's Play Steven Universe: Save the Light; we continue our exploration of the Hidden Gove and mop up all of its treasures. We lolligag a bit but such is life.

Steven Universe is a cartoon that first aired on the Cartoon Network in 2013. It follows the story of a rag tag crew, mainly Steven, Pearl, Amethyst, and Garnet. The show has a varied and colourful set of supporting characters that are all awesome and there are too many to list. The Crystal Gems is a group composed gems, magical aliens made of precious stones, and Steven a half human have gem. The cartoon centers around Beach City and has the group fight off alien invasions, solve interrelational problems, and just get into some random and wholesome trouble.

Steven Universe: Save the Light, and its prequel Attack the Light serve as canon off TV episodes. They are light RPGs that make use of timed attacks in their turned back battle systems. In Save the Light, Steven can recruit allies outside of just the crystal gems and he can explore the city while also completing side quests.

Steven Universe: Save the Light was developed by Grumpyface Studios and released in October of 2017 on various platforms.

If you guys enjoyed my video, leave a like, comment, or subscribe! Every contribution from you fine people fuels my motivation and makes the creation of these videos all that much easier. Thank you for watching! 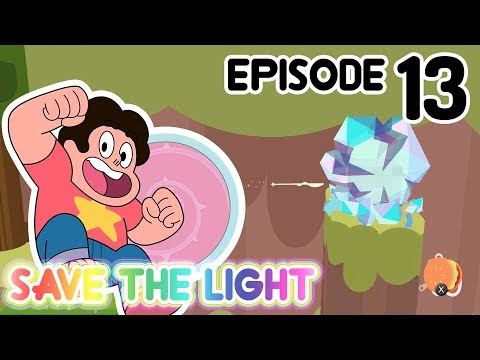 In this episode of Let's Play Steven Universe: Save the Light; we continue our exploration of the Hidden Gove and mop up all of its treasures. We loll...