Check out these AMAZING Inventions Inspired By Insects! From cool futuristic technology inspired by animals to other incredible stuff, this top 10 list of technologies inspired by bugs will amaze you!

10. Robobee
First unveiled in 2013, Harvard’s Robobee project is still being continuously developed. At its core is a simple idea, it’s a miniature drone influenced by designs found in the insect world. Weighing just 175 mg, (that’s 14 times lighter than a penny), it looks almost delicate as you can see in this picture from Harvard School of Engineering and Applied Sciences.

9. Anti Reflective Film
Moths have developed a number of ingenious adaptations to enable them to survive, and scientists are taking inspiration from them to develop new technologies. In particular, there's a water repellent coating on their eyes that allows them to see at night, while being one of the least reflective surfaces seen anywhere in nature. This means that they're virtually invisible to predators at night, but there's a range of ways that this can be useful.

8. The Dew Bank Water Bottle
A beetle found in the Namibian desert, known as the ony-macris ungui-cularis, finds itself in an incredibly dry environment, so it has developed a unique way of collecting water. Early in the morning while fog covers the sand dunes, the beetle climbs to high points and positions itself in a way that encourages dew to collect for it to drink.

7. facetVISION Camera
The face of photography is changing with the prevalence of smartphones that are equipped with powerful cameras, but they’re about to get a whole lot better. Much of the thickness of a smartphone is dictated by the size of the camera lens, which are typically no smaller than 5mm. But what if this could be reduced to just 2mm?

6. Antenna
There’s a species of small parasitic fly, called the Ormia ochracea, which has an incredibly strong sense of hearing. The females have developed this ability to allow them to effectively track male crickets by listening out for their chirping and then laying their eggs on them. Unfortunately for the crickets, when the eggs hatch their larvae use their host as their first meal, but that’s a more gruesome story for another day.

5. Mirasol Low Voltage Display
E-readers began life using e-ink that was limited to certain colors and had readability issues in sunlight so it was a natural step to look at new ways to improve their ability… and to do this, designers took inspiration from the animal kingdom- in particular, butterflies.

4. The Dragonfly
As designers plan the buildings of the future, they need to take sustainability and eco-consciousness into account. One plan (of many) created by the Belgian architect Vincent Callebaut has taken inspiration from the design of the dragonfly to achieve these aims.

3. Honeycomb Tires
For the most part, tires that rely on being filled by air work perfectly fine, but what if there was an alternative solution? Spurred on by difficulties faced by military vehicles where even ‘run flat' tires don't work very well, Resilient Technologies and Wisconsin-Madison's Polymer Engineering Centre realized that a honeycomb design was ideal.

2. Microneedle
People with aichmophobia are scared of sharp objects, such as needles… but even if you don't have the phobia, getting an injection can be a rather unpleasant experience. This is partly because of the procedure taking place, but also because of the size of needle that’s being inserted. But what if the needle could be much smaller? That’s what researchers are hoping will be the case after taking inspiration from our friend, the Mosquito.

1. Mondo Spider Electric Vehicle
This brings us to probably the coolest invention to have ever been built… the Mondo Spider Electric Vehicle. It was originally built by a team from Vancouver for Burning Man in 2006 but has recently been retrofitted to remove the petrol engine and replace it with a 5kWh (Kilowatt hour) Lithium Ion battery. The entire vehicle weighs 1600 pounds, is five feet tall and eight feet long. The skull topped throttles control the hydraulic powered arms, with a control system based on what you’d find in a tractor.

Origins Explained is the place to be to find all the answers to your questions, from mysterious events and unsolved mysteries to everything there is to know about the world and its amazing animals!
Du musst Dich Anmelden oder Registrieren, um einen Kommentar zu schreiben.
Schreib als Erster einen Kommentar zu diesem Video 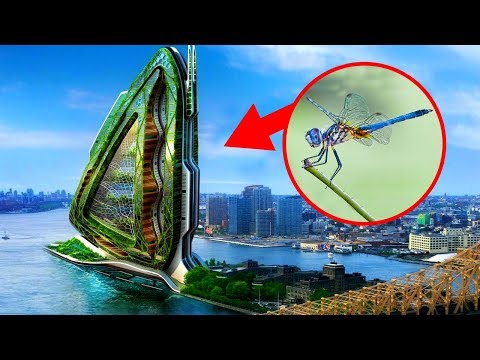 Check out these AMAZING Inventions Inspired By Insects! From cool futuristic technology inspired by animals to other incredible stuff, this top 10 lis...