Number 9 Mau rakau
Mau rakau is a martial art involving the use of traditional Maori tools. On New Zealand’s Mokoia Island there are schools which teach the wielding of the taiaha. Actor Cliff Curtis has attended the Mau Rakau program at Mokoia Island ever since he was 10 years old.
Number 8 Limalama
This Polynesian martial art originated on the insular nation of Samoa and roughly translates as “hand of wisdom”. It was created by Tu’umamao “Tino” Tuiolosega with traditional Polynesian techniques that were passed down to him from his father and his uncle. He’d studied aikido, Shaolin Kung Fu, judo and other martial arts. As an amateur boxer, he’d had more than a hundred matches. The martial art involves flowing, circular movements and mainly uses hand techniques. Tino introduced his style in Hawaii and then opened schools in California.
Number 7 Shin-Kicking
It’s still practiced today and the World Shin-kicking Championship draws crowds of thousands. There’s also a referee to determine the winner, who, in modern competitions, is the best out of three rounds.
Number 6 Bataireacht
Bataireacht encompasses the various stick-fighting martial arts practiced in Ireland. The “bata”, or stick, varies in length and shape in accordance to the style. Competition among these factions soon moved into other sports, like hurling, and the martial art faded towards the end of the 20th century. The modern practice of bataireacht is linked with preserving Irish tradition. Some forms are particular to a specific family as a historical heritage that’s passed down from generation to generation.
Number 4 LINE
It was a fusion of various martial arts put together by former Marine Ron Donvito. A review board studied the style’s efficiency and cleared it for adoption in the USMC.
Number 3 Coreeda
The Coreeda is a folk wrestling style from Australia, based on Aboriginal fighting techniques that existed before colonial times. Evidence from rock art sites in New South Wales suggests that the first Coreeda tournament was held more than 10,000 years ago. Aboriginal wrestling was a form of martial arts training meant to control hostilities at tribal gatherings and to prepare young men. It was also done purely for recreation. The warm-up ritual involves a traditional kangaroo dance while the wrestling match takes place in a circle, roughly 15 feet in diameter. The legend of how Coreeda came to be is about a lizard man called Beereun.
Number 2 Systema
There are various styles of Systema which have been developed in martial arts schools since the fall of the Soviet Union. The overarching techniques used in Systema involving controlling the opponent’s body through pressure points and critical strikes.
Number 1 Dambe
Dambe is a martial art traditionally practiced by the Hausa people of West Africa, as part of entertainment during local harvest festivals. A strong-side fist is wrapped in cloth and covered by a tightly-knotted rope. Although the practice is now banned, fighters used to dip their spear in resin mixed with pieces of broken glass. The lead hand can be used to hold or grab as needed and it’s known as the “shield”.
Du musst Dich Anmelden oder Registrieren, um einen Kommentar zu schreiben.
Schreib als Erster einen Kommentar zu diesem Video 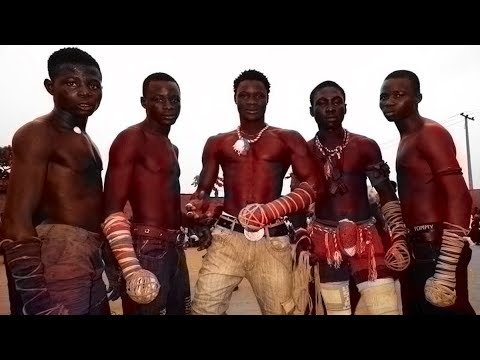